Who’s most electable in the GOP field?

A national survey experiment designed by ES to test each of the three GOP frontrunners (Romney, Cain, and Perry) in a head-to-head match up against President Obama. It is a nationally representative, general population sample consisting of 1,005 respondents, fielded by YouGov October 7-11th.

ES had the first real evidence of how Cain, Perry and Romney might perform head-to-head with President Obama in the general election. Instead of the old, static approach to polling, we introduced our respondents to one of the top three candidates to see how Cain, Perry, and Romney impact the vote choice of a general audience. The experiment was fielded between October 7-10, amidst rampant speculation about the electability of Herman Cain and the rest of the GOP field.

Contrary to the popular narrative that Mitt Romney is most electable, we find that Gov. Rick Perry does best when the top three GOP contenders are introduced to the general public. Download the full report,crosstabs and see the treatments.

Most Americans outside of the media and politics have little idea who Romney is, let alone Perry or Cain. The only way to get a real sense of how each candidate might play in a general election is to introduce a nationally-representative sample of respondents to the candidates. We therefore had our respondents read a short, 125-150 word bio and watch a video clip of President Obama speaking about the economy, followed by a video clip of either Romney, Perry, or Cain speaking about the economy during the Fox/Google debate (see the treatments).

Modeling Voter Behavior in a Survey: The MoneyVote Game

The standard vote choice question is abstract and hypothetical. To address this problem, we adapted experiments from behavioral economics to create a game that is analogous to a real-life primary vote decision. 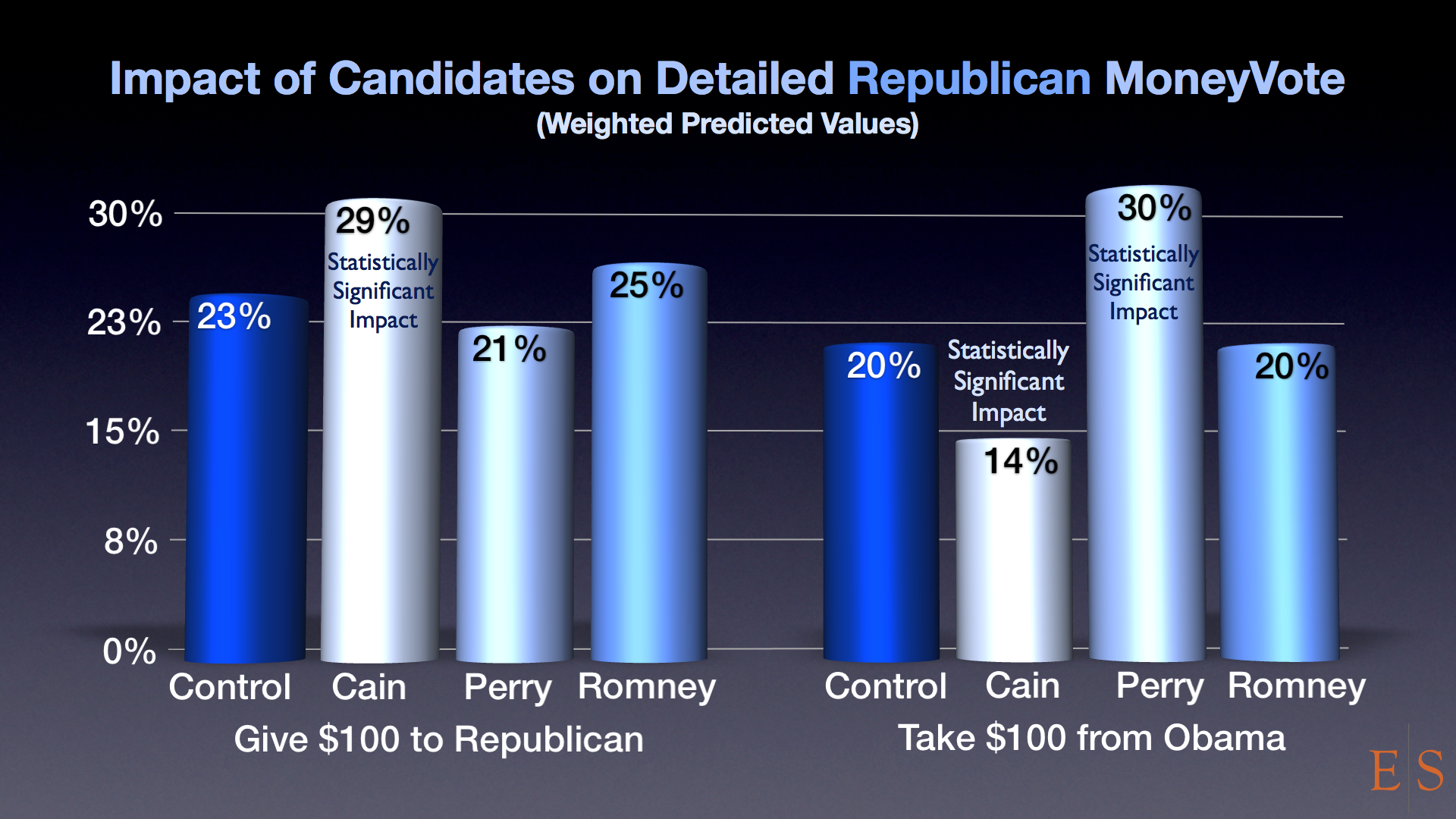 Our MoneyVote game helps make the stakes real by allowing respondents to help or harm candidates in a concrete way.

We gave each respondent $100 to assign to Obama or the Republican candidate (a generic Republican in the Control condition, and either Cain, Perry, or Romney in the treatment conditions). They could also choose to take away $100 from one of the candidates. And if they were really uncertain, they could choose to let the money go to the default winner of the survey.

This allowed us to capture not just who someone is likely to vote for, but why.

There is no evidence of a backlash effect against any Republican candidate. The unconventional Herman Cain reduces the Anti-Republican vote the most, and the impact is statistically significant. 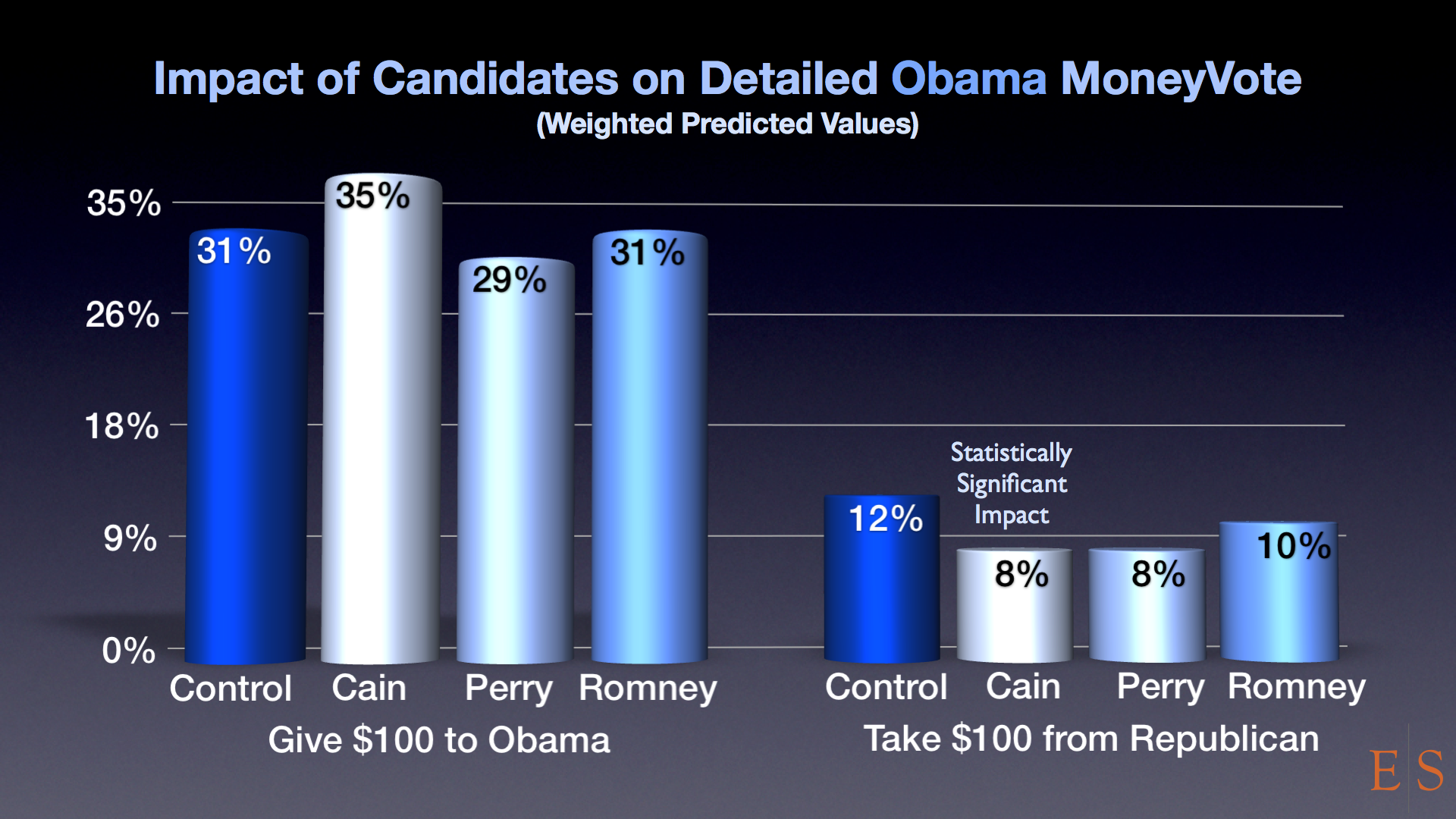 But Perry, a southern, conservative Republican, comes in a close second, while Romney pulls in third despite a widely perceived advantage as a more moderate former governor of a Blue state.

Interestingly, Cain also reduces the percentage of respondents who want to take money away from Obama. Perry, on the other hand, increases the ranks of Anti-Obama voters by 10 points, a large and statistically significant impact.

Finally, Cain significantly increases the percentage of respondents who want to support the Republican ticket by a statistically significant 6 points.

Romney has relatively little impact across all choices, with values that hew very close to what we find in the Control condition with a generic Republican candidate. 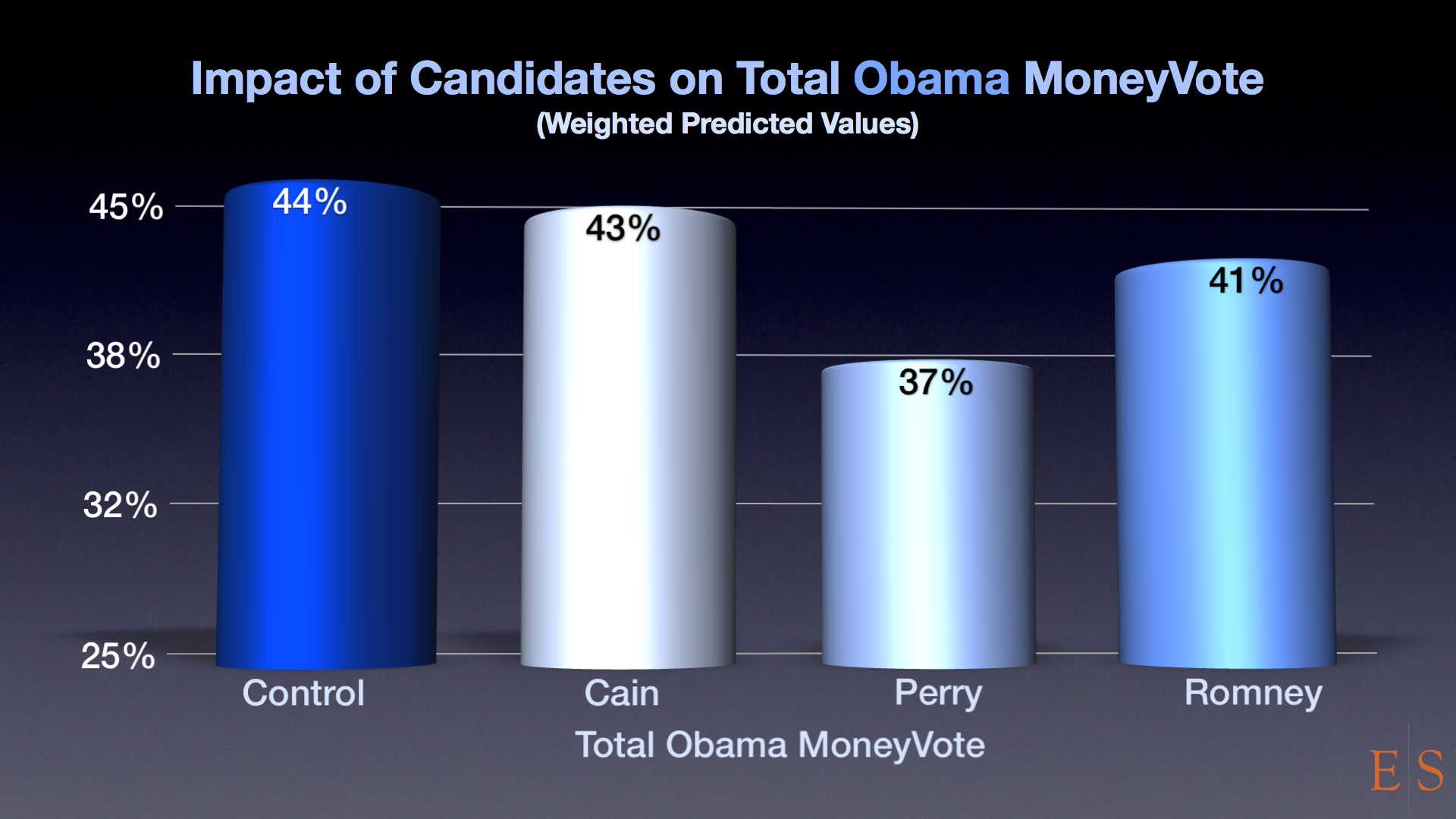 Cain and Romney barely budge the total Republican vote, although as we can see in the detailed charts on the previous page, there is a lot of movement in the components of that vote for Cain. Romney, on the other hand, generally mirrors the Control.

For the total Obama vote, Cain and Romney again end up very close to the Control condition total.

And yet again, Cain is running in place, with a lot of underlying movement but little net gains, while Romney seems to have little or no effects at all compared to the Control.

The net result of these impacts on the MoneyVote is dramatic; Gov. Perry turns in a 14-point margin of victory over President Obama.

Romney edges out a 4-point margin over the President, and Cain runs essentially dead even. Introducing the top GOP contenders to the general American public turns conventional wisdom on its head; it is Rick Perry, not Romney, who appears most electable.

The MoneyVote vs Standard Vote Choice 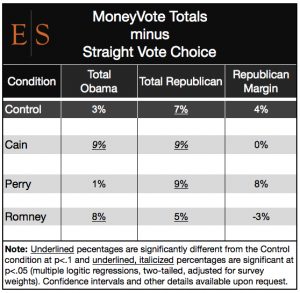 The behavioral game resulted in significantly less uncertainty regarding vote choice than we found in the traditional, straight vote-choice question, and revealed significant differences in the underlying reasons for a two-party vote choice. (See the full report for additional details.)

In both the Cain and Romney treatments, the Obama and Republican vote totals are larger for the MoneyVote than for the straight vote choice (and that difference is statistically significant).

The net result is a wash for Cain and drop in Romney’s margin compared to the traditional vote-choice measure. Perry’s margin is 8 points higher compared to the straight vote choice accounting, the result of a higher Republican vote share and only an insignificant 1-point increase in Obama’s share.

The bottom-line? We get more, and more actionable information from this approach compared with the traditional means of gauging the prospects for candidates in a general election forced-choice scenario, where the vast majority of voters choose one candidate, even if they don’t like that candidate.