GOP primary dynamics: the impact of advertising on candidate support

Evolving Strategies is the first to provide objective, scientific evidence of Newt Gingrich’s vulnerability in the primary race. Some analysts claim Gingrich’s long career means that the public already knows the candidate, and they have priced his negative “baggage” into his stock. Still others argue voters don’t know Gingrich, what he stands for, or what he’s been doing since leaving office. Download the full report, topline results and see the treatments.

In the past week, new attack ads against Gingrich have hit the air. Will support for Gingrich hold or collapse under attack? Does Romney gain support in the midst of all the negatives? And are voters willing to give Perry a second look? These questions are impossible to answer with standard surveys. That’s why ES executed an online message experiment testing pairs of positive and negative ads about Romney, Gingrich, and Perry. We utilized a non-probability, opt-in respondent sample of 672 Republicans fielded December 6-8th. 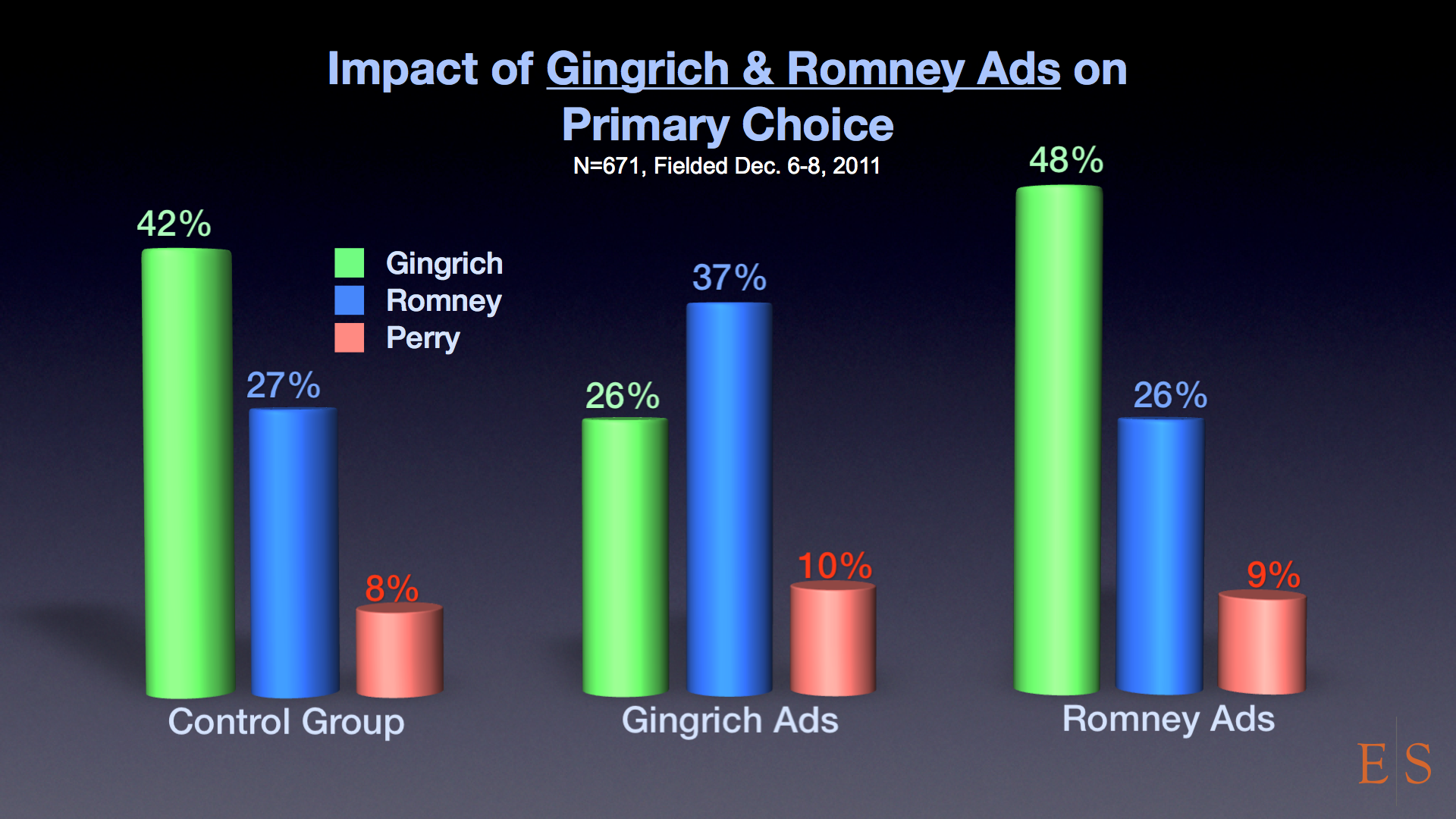 Despite his surge and continuing lead in the polls, Gingrich appears highly vulnerable to attack. GOP primary preferences still appear unstable and susceptible to small changes in the flow of information.

It is important to emphasize that respondents always watched both a positive and negative ad for a candidate (and always in the context of a positive and negative Perry ad), so this balance should moderate any positive or negative impact overall. Nonetheless, when respondents watch the Gingrich ads, his support declines 37 percent from the Control condition. Perry gains from Gingrich’s loss, but only slightly. He rises about 2.5 points, from under 8 percent in the Control group to 10 percent in the Gingrich Ad condition, a 35 percent gain.

The big winner here is Romney, who’s support increases 39 percent in the Gingrich condition compared to the Control condition. But watching the Romney ads has relatively little impact on the primary ranking. Gingrich rises only slightly when respondents view the two Romney ads, Romney’s support is maintained, and Perry’s barely moves. Confirming previous experimental results, Romney seems to be the null candidate. Respondents know who he is, good and bad, and he advances when the negatives of other candidates are in the spotlight. 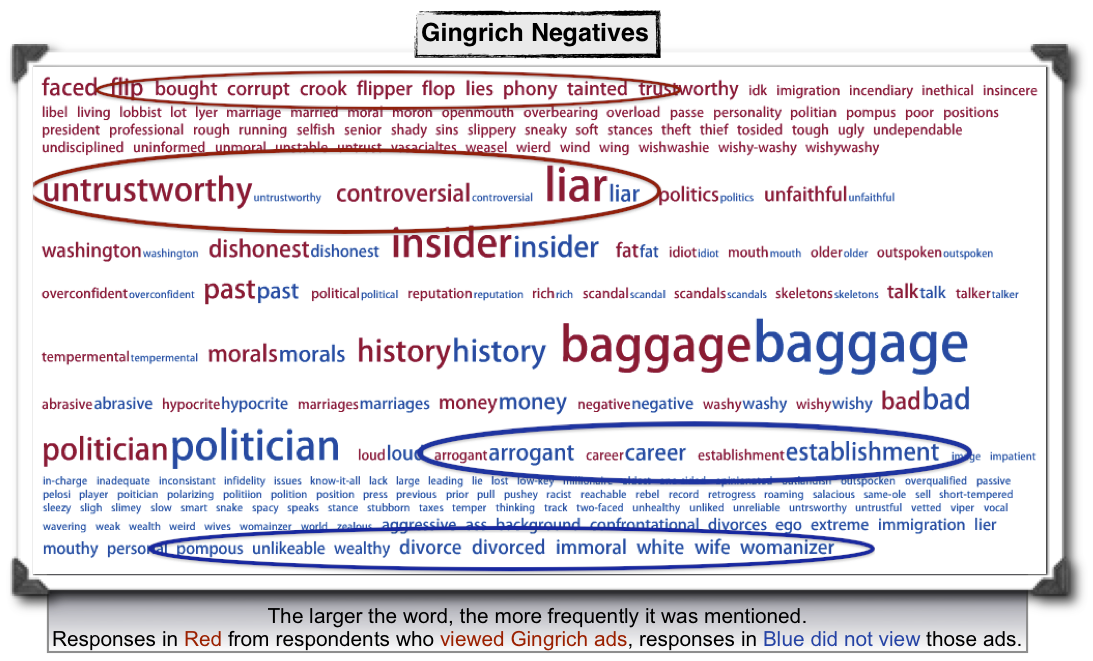 In order to obtain a bit of color on the candidates and get a feel for how our experimental treatments might be impacting support for the candidates, we asked respondents to write down the first negative and then positive word that came to mind for Gingrich, Romney, Perry, and Ron Paul.

You can see that respondents who did not view Gingrich ads tended to focus on older negatives for Gingrich; personal failings and a perception of being a “divorced” “womanizer” who is part of the “establishment.” Respondents who viewed the Gingrich ads deem him an “untrustworthy” and “controversial” “liar.” The words “phony,” “crook,” “corrupt,” and “bought” all appear more than once in the Gingrich condition, but not at all among those who did not watch those ads.

Clearly, it seems that the Gingrich ads are introducing new, and more politically concerning, negative associations with Gingrich.

Design of the Experiment & Survey Instrument

In order to test the impact of GOP primary advertising on the state of the race, we designed an experimental framework. Respondents were randomly assigned to one of three conditions* – two treatment groups and a control:

*Note: We randomly rotated in one of five positive Perry clips to determine if any particular ad seems more or less effective. Analysis of these impacts creates 11 conditions (Control, 5 Perry Ads*Romney Ads, 5 Perry Ads*Gingrich Ads). For the purpose of this analysis, the relative impact of these individual Perry ads is not addressed. Analysis of these positive Perry ads will follow shortly.

The survey instrument was otherwise identical, and the total length of the four ads in each condition ran three to four minutes. Our online platform also allowed us to use images of each candidate throughout the survey to facilitate the task.

We measured support for the candidates in four different ways:

The first measure, Candidate Preference Ranking, is analyzed in this summary. Preliminary analysis of the other measures strongly confirms our conclusions. Check back soon for additional analyses.