An online message experiment testing the impact of pro and anti-PFA messages on public opinion.

The Independent Women’s Voice (IWV) commissioned Evolving Strategies to test the effectiveness of policy messages related to the Paycheck Fairness Act and the “War on Women” narrative.

When women hear both sides of the PFA argument, overall support for the PFA plummets and weakens dramatically. PFA support declines most when it is reframed in economic terms. Most surprisingly, we find that debate about the PFA actually hurts President Obama substantially with the Independents and weak partisan women who have traditionally supported him and helped put him in the White House.

(See the summary report here and the treatment details here.)

Will the “War on Women” campaign work? Is the PFA an effective weapon to use against Republicans? These questions are impossible to answer with standard surveys. Unlike standard polls that simply ask respondents if they find an argument convincing, we executed a controlled message experiment in order to determine the real causal impact of IWV’s anti-PFA messages in the context of Progressives’ message on the Paycheck Fairness Act and other important issues.

Respondents were randomly assigned to one of five conditions in a true experiment – four treatment groups and a control. All treatment conditions included the Progressive message; three treatment conditions also included IWV messages on the PFA. We surveyed only pure independents and weak partisans – no strong Republicans or Democrats were included (a non-probability, opt-in respondent sample of 1,006 registered independent and weak partisans fielded May 24-29th). Statistical analyses were then performed to identify significant treatment impacts. 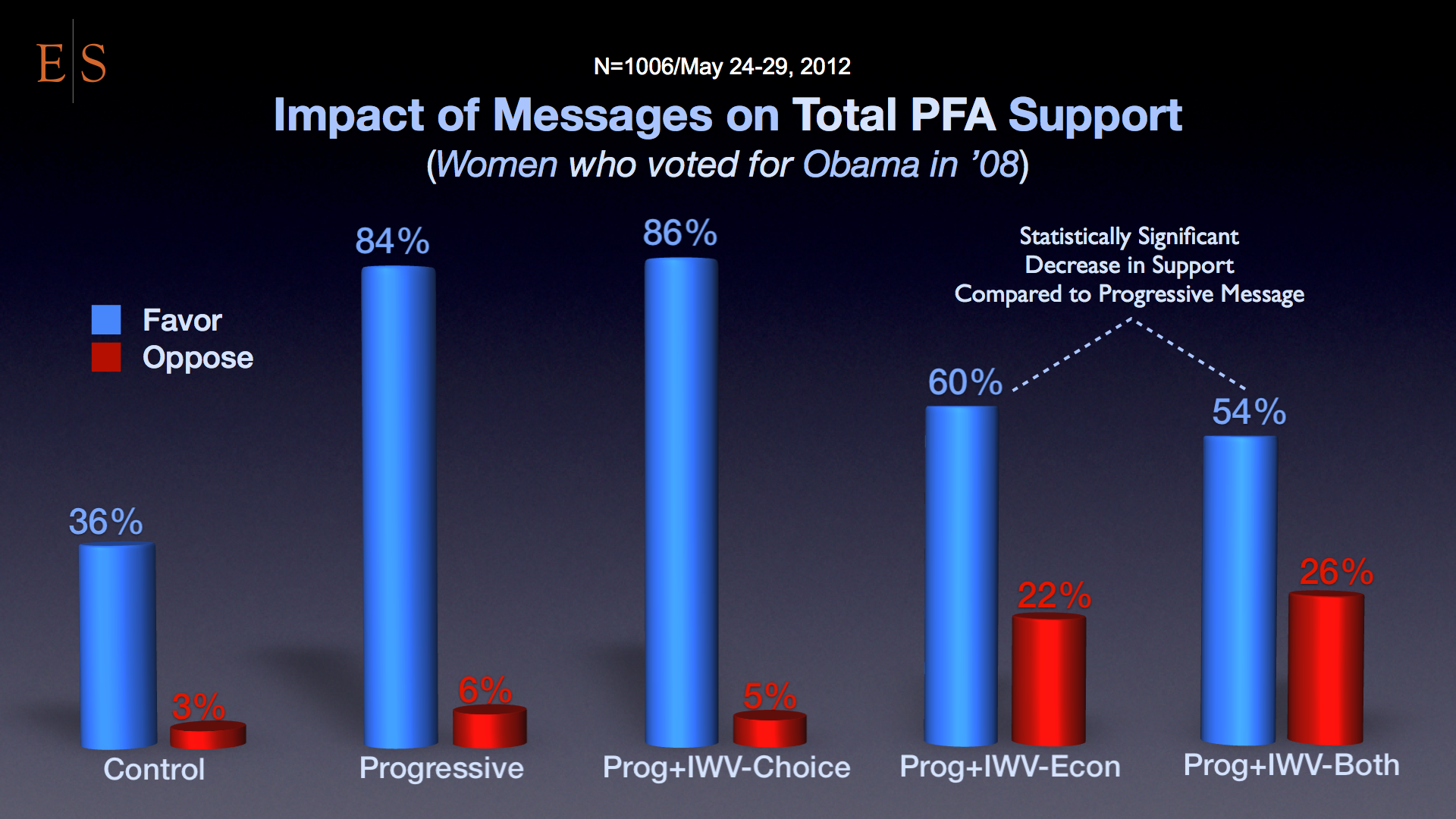 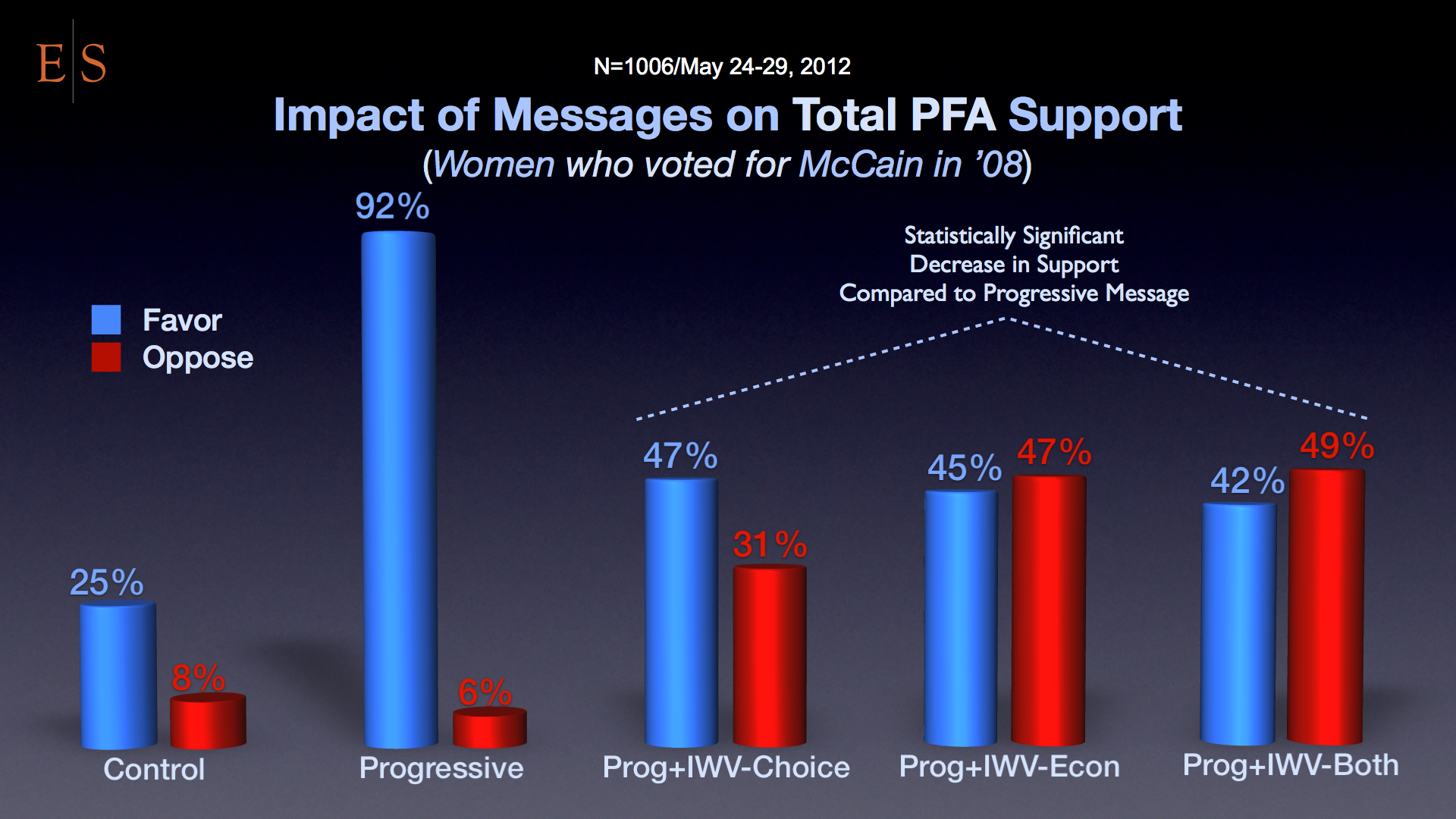 Support for the Paycheck Fairness Act

The overwhelming majority of the public has never heard of the Paycheck Fairness Act (61 percent, with just 13 percent knowing a little or a lot about the PFA). In fact, about two-thirds of women (66 percent) have never heard of the law.

We found that the vast majority of women (74 percent) agree at least somewhat that workplace discrimination is a serious problem; but this doesn’t necessarily mean they want more government regulation to “solve” the problem.

Support for and opposition to the PFA is easily shifted and weak when both sides of the argument are heard.

The Progressive message on the PFA shifts opinion substantially in favor of the PFA, but IWV’s economic message, that the PFA would be bad for business and the economy, shifts it back towards balance. 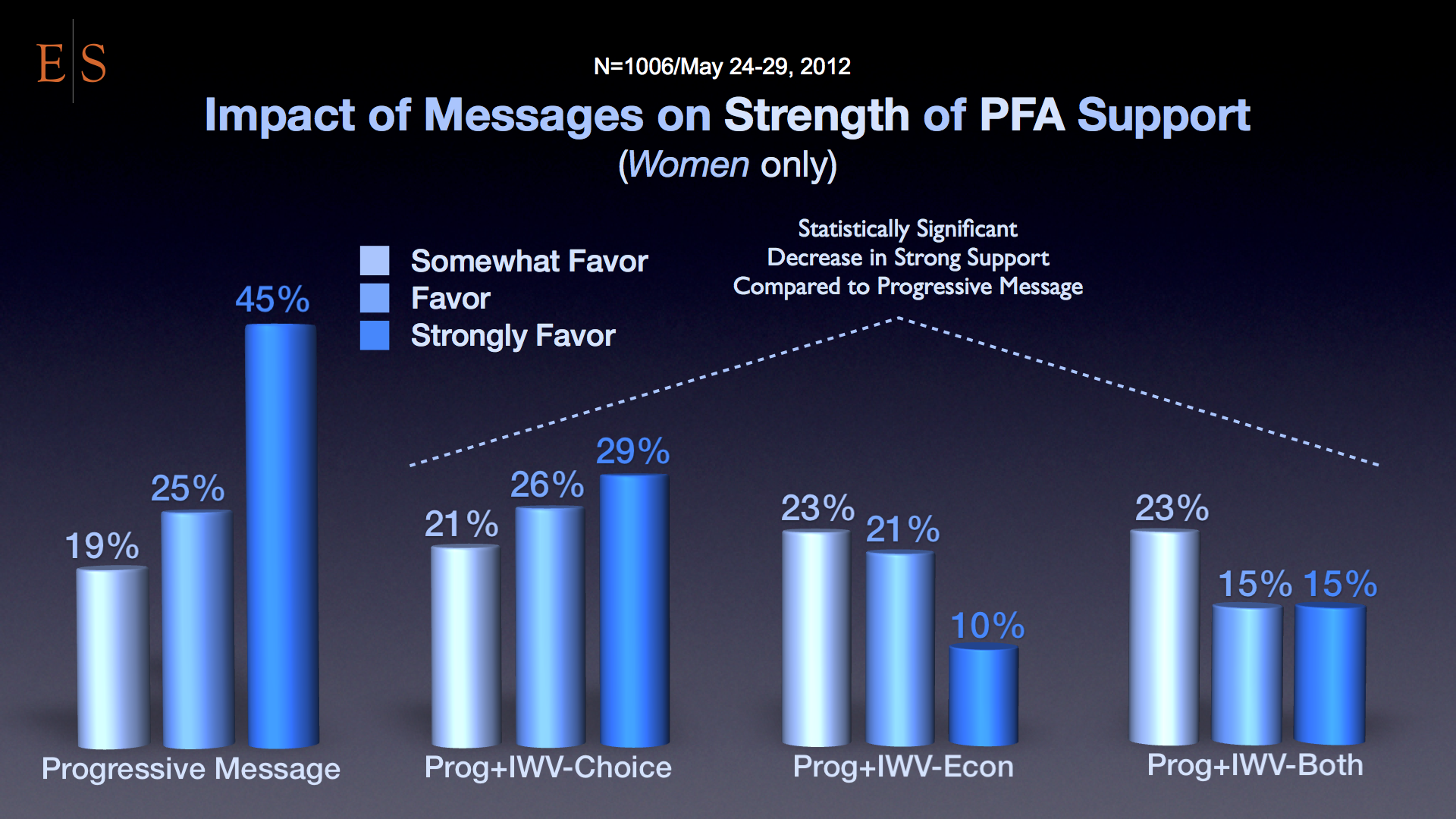 Surprisingly, a message focused on popping the myth of the wage gap and emphasizing the choices women make is relatively ineffective at blunting the pro-PFA argument.

Women move most when IWV highlights the ill-economic effects of burdensome regulation like the PFA.

When respondents read about the economic ramifications of the bill (in addition to Progressive arguments), support dramatically decreases. “Strong” support for the bill drops 35-points to a mere 10 percent.

Even the Choice condition, which does not decrease total support significantly, is effective in significantly decreasing the strength of support for the PFA. This is simply not a burning issue, even for women who voted Democratic in ’08. 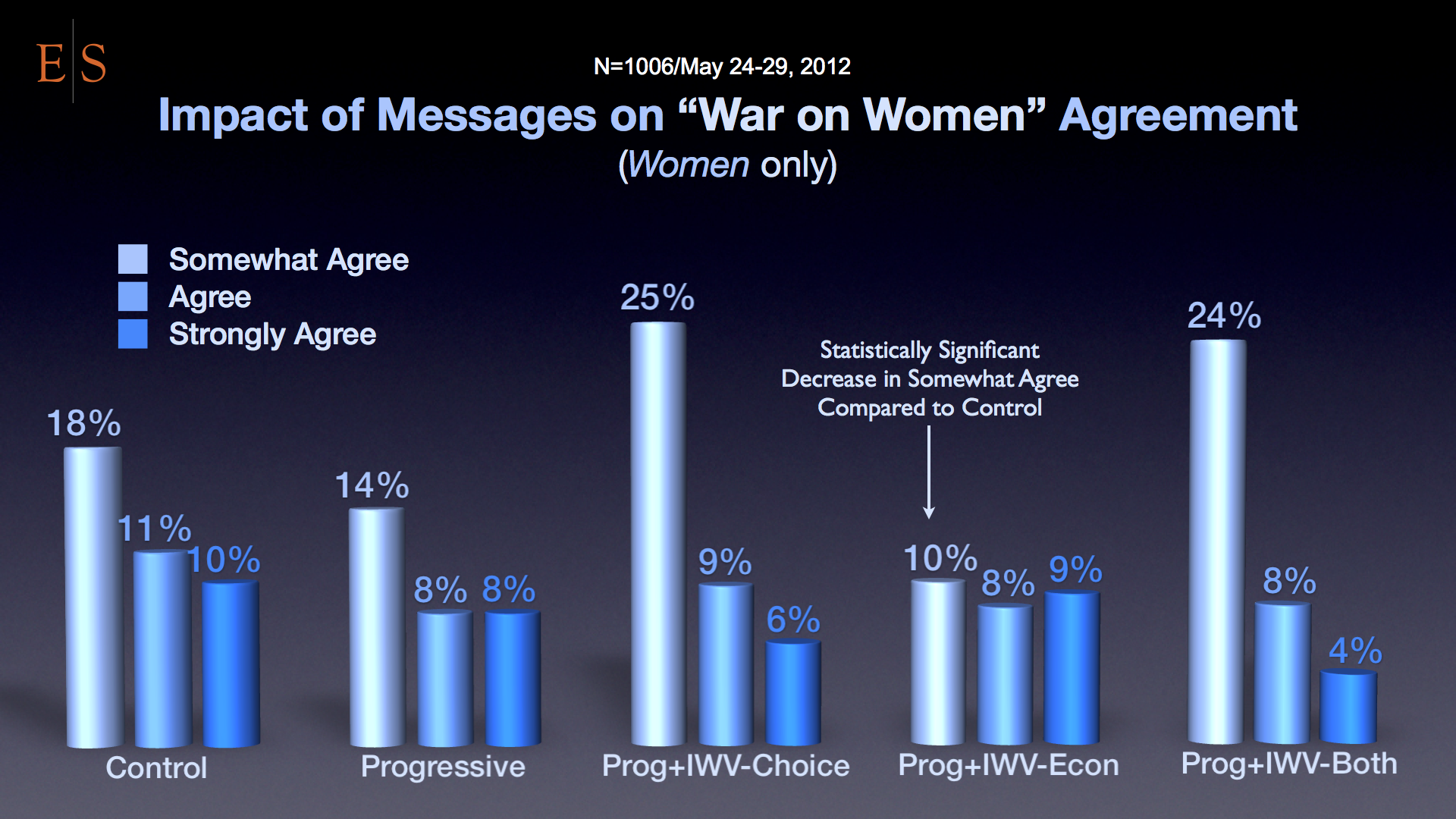 The IWV Economy message on the economy appears somewhat effective at decreasing agreement and increasing disagreement among women that there is a WoW.

The Progressive and IWV messages shift opinion on discrimination only a small amount. These views seem much more rooted, most likely because its formed through direct experience and the experience of friends and families. 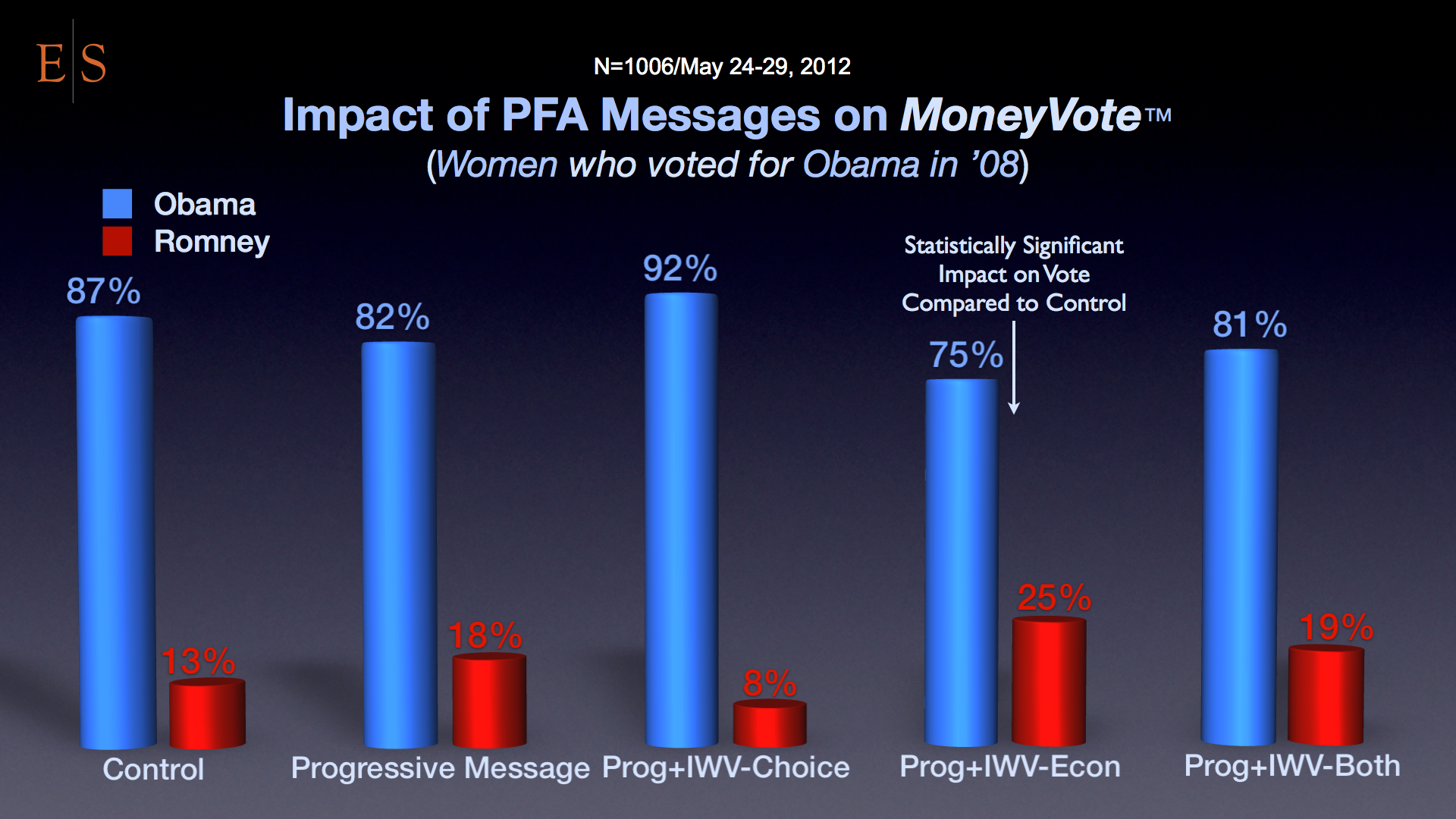 politics will help boost their vote among women in November, but our results suggest the opposite. The Progressive message in favor of the PFA is not effective at increasing support.

In fact, the debate over the PFA reduces support for President Obama among women who already voted for him in 2008 by 12-points, from 87-75 percent. Romney’s support jumps 12-points from 13 percent to 25 percent.

This negative impact on Obama’s standing is visible in our analysis of the policy questions as well. 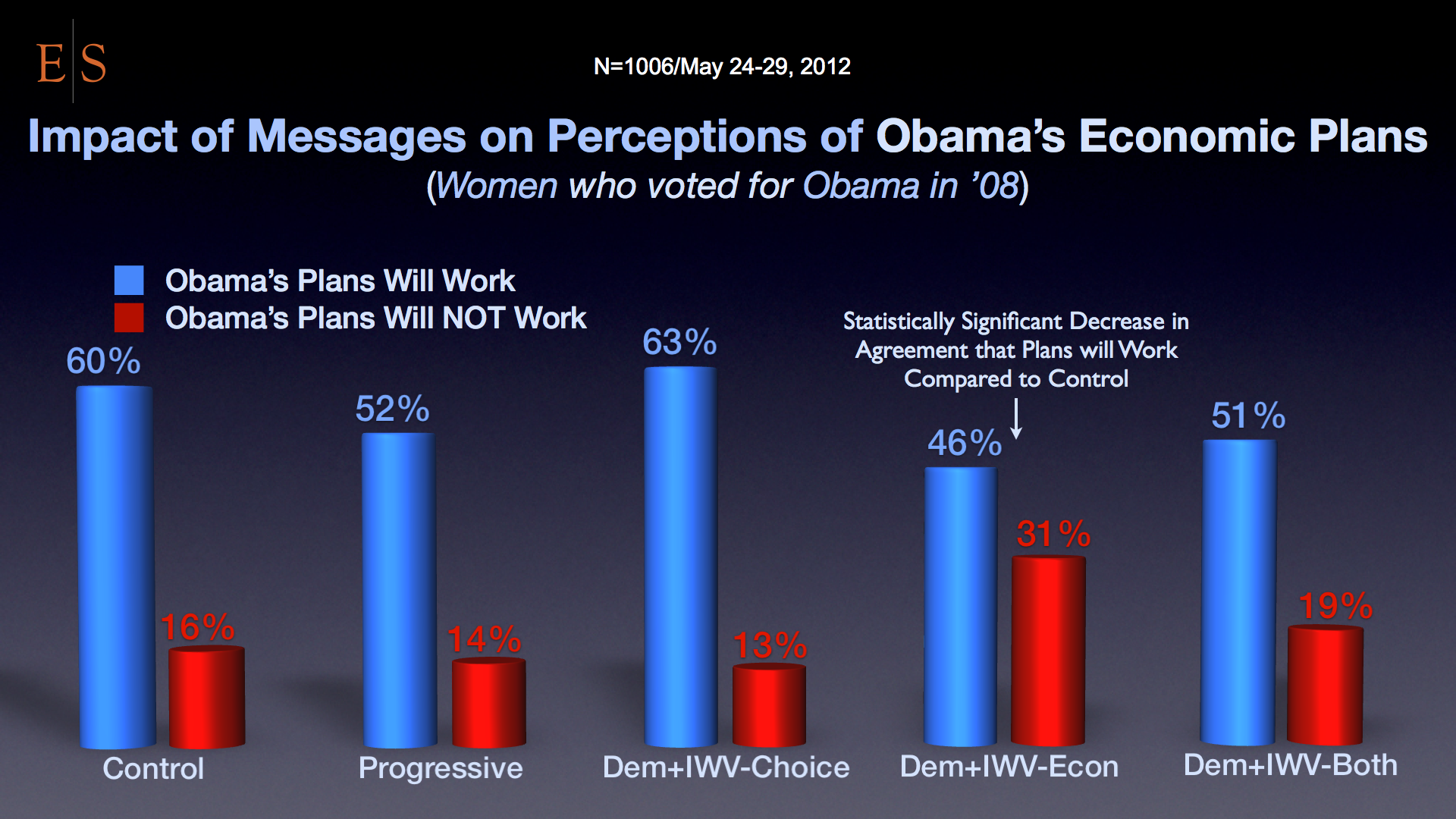 In short, the PFA debate appears to be a potentially serious problem for Progressives in 2012.

Views on Fairness & the PFA

We asked respondents to fill out a series of measures about fairness and “distributive justice,” an important dimension of people’s moral framework. The measures are a subset of those used by researchers (in particular, Ravi Iyer), the most prominent of whom is Jonathan Haidt, an academic psychologist who recently released a popular book on politics and moral frameworks.

We asked respondents how morally wrong they thought certain situations were that violated the values of proportionality (someone getting what they deserve), equality (getting an equal outcome), and need (getting what they need). 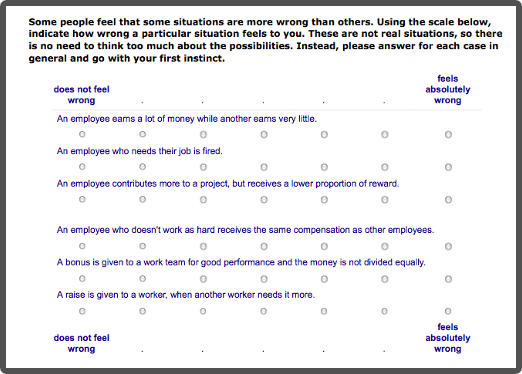 We found that a woman’s perception of fairness based on equal outcomes, the extent to which she considers equal outcomes relevant to morality, is extremely important in driving support for and opposition to the PFA. The greater moral weight a woman gives to “equal outcomes,” the more likely she is to support the PFA.

Furthermore, support for Fairness as Equal Outcomes becomes relevant only when women are engaged with arguments for and against the PFA. In other words, the arguments are working; women are using their individual moral frameworks on Fairness to assess the arguments, and their opinion moves in response.

In other words, perceptions of Fairness as Equal Outcomes cuts across Party identification and even political ideology. 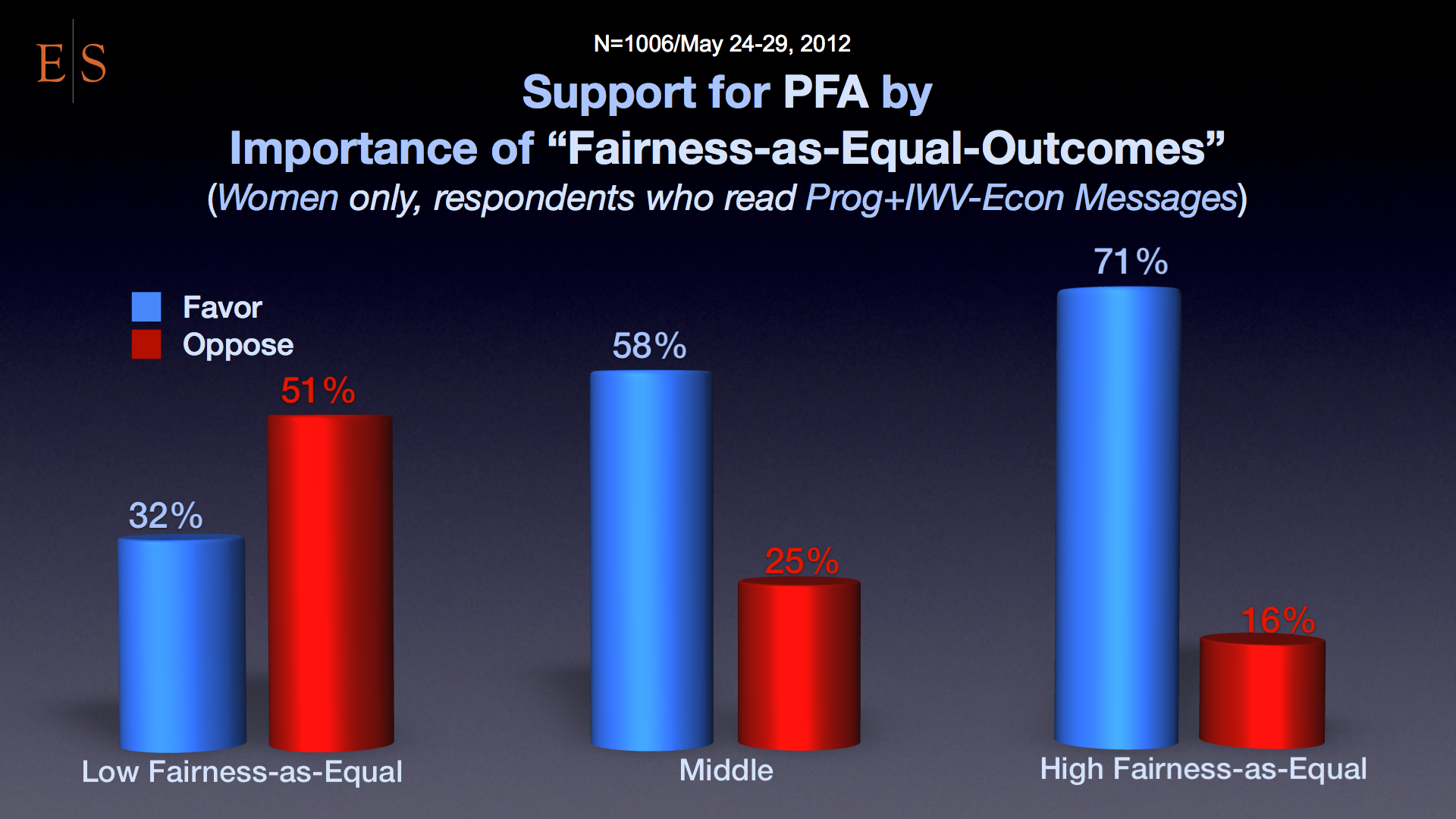 The best guide to who will support or oppose the PFA is not Party or ideology, but perceptions of Fairness.